How To Marry and Sponsor Your Spouse from Denmark

Requirements To Get Married in Denmark

In order to marry a citizen of Denmark, you must demonstrate to the Danish government that you are eligible to do so. This includes:

Costs Of A Denmark Wedding

The state fee of €220 is included in the price!

Legalization/apostille of your marriage certificate + shipment by post – 220 EURO.

The prices for these services are individual:

You can apply to get married in Copenhagen, elsewhere in Denmark or abroad as early as 4 months before your expected marriage date.

Marriage handled by the Agency of Family Law

You should apply through the Agency of Family Law if one or both of you:

Marriage handled by the municipality

You should apply through the municipality where you and your partner are registered at (bopælskommune) if both of you are:

You both need NemID to complete the application online. You will receive a reply through your Digital Post (e-Boks).

Traditionally in Denmark, it is the man who proposes to his girlfriend, but the couple usually buys the wedding rings together as well as shares the cost. The cost of the wedding is also shared between the bride and groom.

The bride buys her own wedding gown and she is not supposed to be seen by the man before the wedding. The bride follows the tradition of wearing four things: something new, old, borrowed, and blue.

The bride and groom are supposed to sleep separately on the eve of the wedding day. In Denmark, most couples cohabit for several years before getting married.

Many couples in Denmark however prefer a secular wedding at the city hall followed by a party afterwards.

When entering the church normally the maid of honor goes to the left and guest of the best man goes right.

After the wedding ceremony, friends and family throw rice at the couple as they leave the Church. Danish weddings are attended by a small number of invited guests, usually not more than 80.

The married couple goes through the photo sessions before everyone heads to the reception.

At dinner there are lots of speeches, songs, fun games, and dancing. There is protocol that has to be followed when giving the speeches first the bride’s father, groom, bride, family (groom’s family) then friends.

At the dinner ceremony, a lot of kissing is involved, if the groom leaves the room men are allowed to rush and kiss the bride, similarly when the bride leaves the room, ladies can also take turns to kiss the groom.

The newly married couple opens the first dance before midnight, a specific wedding Waltz is played. When the dance starts, all guests make a circle around the couple and slowly moving in on them while dancing.

After some time, the male guests lift the groom up and cut off the tips of his socks to symbolize his loyalty to his wife, the meaning is that he should never walk in the footsteps of other women.

At around 2am, a night course is served to replenish the guests partying all night.

Possible Challenges for Getting Married in Denmark

Sponsoring Your Spouse From Denmark To Canada 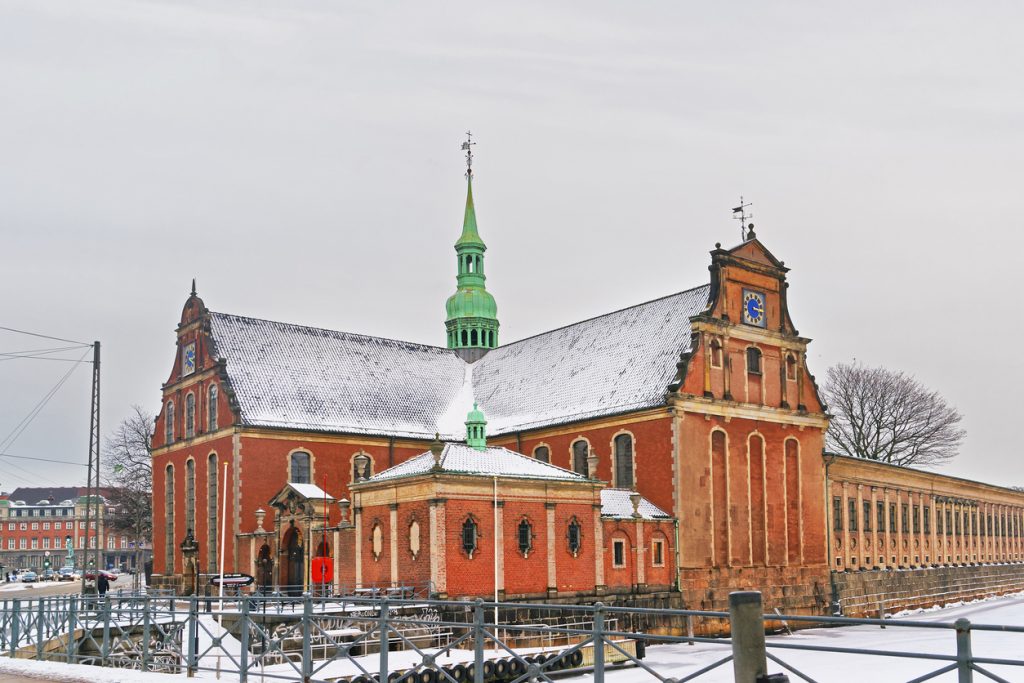 Cultural practices which may be challenging in sponsorship applications/interviews, such as:

In Denmark, pro forma marriage is prohibited. This means that the marriage must not be entered into if there is reason to suspect that the purpose of the marriage is to obtain the right of residence in Denmark, an EU country, in Switzerland or in another country covered by the European Economic Area. Because of the prohibition against pro forma marriage, we will inquire about your personal relationship, e.g. how long you have known each other, where you met each other, whether you have children together, whether you live or have previously lived together etc.

Do people in this country engage in arranged marriages/matchmaking? Or are marriages usually love marriages?

In contrast with America’s male-oriented gender bias, Denmark’s high level of male-female equality fosters behavior that transcends the gender barriers set by less egalitarian societies. As a feminine culture, Danes have more flexible gender roles, which allows them to be more relaxed when considering romantic relationships. The absence of pressure to fulfill certain gender-based stereotypes fosters a liberal attitude toward sex, dating, and marriage.

Denmark also has a very high divorce rate, with nearly 45 percent of all marriages resulting in divorce. The lack of pressure to marry in combination with the social normalcy of divorce breeds healthy relationships, which could explain the Dane’s tendency toward public displays of affection.

Denmark is one of a growing number of countries that have passed laws criminalizing forced marriage.  But, in spite of a 2008 amendment designed to strengthen Denmark’s forced marriage legislation by increasing the punishment from two to four years of prison, nobody has ever been convicted under the Danish law.  According to PhD student Sabba Mirza, quoted in The Copenhagen Post:

All the organisations that are working in the field say that there is an increase in the number of [forced] marriages. So when there are no cases for the courts then it could indicate that the rules aren’t good enough.

Advocates have identified two key problems thwarting authorities’ efforts to intervene in forced marriage cases, shortcomings that could explain why the law isn’t having its intended effect.  First, Denmark’s forced marriage law applies only to marriages that are formally recognized by the Danish government, whereas many forced marriages are conducted privately and never officially registered.

A second major flaw in the Danish law is that it focuses on preventing non-consensual marriages induced by physical force, whereas most forced marriages are the result of acute psychological coercion.  “[T]he law should be widened so that it also includes psychological pressure,” says Mirza, “which in many cases can be far more oppressive than real violence.”  Peter Skaarup of the Danish People’s Party (Dansk Folkeparti) agrees: “I think the situation would definitely change if we broadened the criteria for how we define ‘force’,” Skaarup told Politiken, “It may help create a mentality change in the parallel societies where this happens and we know through studies that social control is often forced through social and psychological pressure and not just violence.”

Frontline responders in other countries that, like Denmark, have criminalized forced marriage complain that criminal consequences have actually deterred victims from reporting their parents and loved ones to police.  A spokesperson for Hemat Gryffe Women’s Aid, a Glasgow safe house for forced marriage victims, told The Scotsman:

We supported 14 women last year, most of whom are quite young, aged 16 to 21.  They suddenly find papers saying they’re going to another country, or the wedding starts getting discussed among the family.  However, you cannot criminalise the family because then the women will not come forward.  They won’t want their parents or aunts or uncles put in jail. The purpose of the bill must be to impose civil order, to prevent the marriage going ahead.

And, a recent study by Dr Aisha Gill at Roehampton University concluded, “For many victims it is crucial that seeking help does not prevent future reconciliation with their families, especially their parents.  In this regard, criminalisation may actively discourage many victims and potential victims from speaking out about the abuse/coercion they are facing.”  Lord Lester, who introduced the UK’s civil Forced Marriage bill into Parliament, has consistently advocated for a strictly civil approach.  The BBC Ethics Guide quotes him as saying that the criminal process “has not proved to be an effective way of tackling a major social problem.”  However, Prime Minister David Cameron and some Members of Parliament continue to push for criminalization, arguing that criminalization would take the burden off of the victim and place it on the state.

Even victims are divided on the civil-versus-criminal debate.  Forced-marriage survivor Jasvinder Sanghera, who supports criminalization, told The Observer that victims will only report violations if they are made to understand that they bear no blame.  “Victims are saying we need the full protection of the law,” says Sanghera, “We’re trying to create a cultural responsibility here. It’s our duty to bring this above ground … This is an offence that is not to be tolerated, an offence that can – and does – end in violence, rape and murder.”  Conversely, forced-marriage survivor, Sameem Ali, adamantly opposes criminalization, saying “No young person wants to turn their parents in and get them into trouble.”

GJI forced marriage initiative director Julia Alanen cautions that “Criminalizing forced marriage could inspire contempt and distrust among the very victims, families, and communities whose cooperation is most critical to ending this harmful practice.  The United States and other countries that are only just beginning to develop a legislative response to forced marriage will do well to consider lessons learned in Denmark and other sovereign states with well-established forced-marriage protection regimes.”

Are documents issued in Denmark issued in any language other than English or French? If so, what language(s)?

The Danish international marriage certificate you receive after your wedding in Denmark is written in four languages – Danish, English, French and Spanish. It is valid worldwide but, in some countries, they do ask for it to be legalized with the Apostille. If you would like to use your marriage certificate for administration in foreign offices, this usually requires that the document is legalized for such use. Not all places require this, but it is advised that you check with the office you intend to use it at first, to know for sure.

Town halls around Denmark have different processing times, they also have different document requirements so the length of time it takes to gain confirmation that your documents have been accepted, once they are with the officials at the town hall, can vary.

Is a TRV required for a person from Denmark to enter Canada for In-Canada sponsorship?

Danish citizens are not required to get a visa to enter Canada, which makes it easy for them to enter Canada as a visitor and apply for inland sponsorship.