How To Marry And Sponsor Your Spouse From India

Requirements To Get Married in India

The following documents can be used to prove the age of the bride or groom:

The following documents can be used to prove the residence of the bride or groom:

The following documents are mandatory to prove the requirement for the wedding:

Witnesses are required to bring the following:

Cost to Get Married in India

Steps to Get Married in India

The Hindu Marriage Act applies to Hindus, Sikhs, Jains and Buddhists. If one of the parties in the marriage is a non-Hindu, he/she must convert to Hinduism before the marriage ceremony can be performed under this Act. People can register their marriage, but registration is not a legal requirement and failure to register a marriage does not affect the legality of the marriage.

Under this Act, marriages can be performed by a minister of religion in a church or by a registrar of marriages.

(1) If a minister will perform the ceremony, one of the partners must notify the minister in writing of his/her intention. The usual notice period allows the posting of bans on three successive Sundays, but under certain circumstances the minister can shorten this period. After the ceremony the minister registers the marriage and issues a marriage certificate.

(2) If a registrar will perform the marriage, he/she will first post the marriage notice in the registrar’s office for one month. After the ceremony is performed in the presence of two witnesses, the registrar issues a marriage certificate.

This Act covers marriages between people of different religions, but people of the same faith can also be married under this Act.

Certain papers must be filed with the marriage registrar, including affidavits (in a prescribed form) by each party that they are single, and certifications from the local police station for each party that they have been resident of that area for at least 30 days. A notice of the intended marriage is published.

Thirty days after publication of the notice, the marriage is solemnized by the marriage registrar in the presence of the bride and groom and three witnesses.

Hindu marriages in India include a number of rituals and customs. These are age-old practices are a pillar of Indian society, and are therefore followed by generation after generation. Weddings are frequently the most important event in one’s lifetime, and are thus solemnized with utmost sanctity.

Hindus believe that once married the couple is bound with each other for seven birth cycles. Such is the depth and intensity of their faith in the institution of marriage. This is attributed by the various rituals they observe.

Generally, Traditional Indian brides wear pink and red saris on their wedding day, adorning themselves extravagantly with as much jewellery as possible.

Henna staining, a customary art form, is still practiced by Indian brides to be. On the eve of her wedding vows, following a traditional ceremonial cleansing, the bride-to-be will have her hands and feet painted with henna, in beautiful paisley or medallion patterns.

Sweets, eggs, and money are woven into to wedding themes of India. They symbolize, respectively, a sweet life, fertility, and prosperity. The Hindu wedding ceremony includes customary rituals to ward off evil spirits.

After the wedding vows have been exchanged, the groom’s father or brother showers flower petals on the newlyweds; then he holds a coconut over the bride and groom’s heads and circles it around them three times. An Indian groom often wears a turban with a veil of flowers streaming down in front of his face to protect him from evil spirits.

Indian weddings are known for their elaborate ceremonies and opulent celebrations. Besides, they are held in a very traditional manner, commemorating numerous rituals as per the ancient Vedic era.

The first ceremony and ritual is Misri – the ring ceremony. This will take place several days before the wedding and calls for seven married women to draw the sign of Lord Ganesha in red powder spread above a bowl of rock sugar.

Prayers are said by the couple and their parents and they will exchange flowered garlands and gold rings in the presence of the priest. The groom’s parents will place on the lap of the bride to be a basket of fruit or other gifts to welcome her in symbolizes the feeding of the family misri, rock sugar – confirming the engagement and promising a life full of sweetness ahead.

This elaborately adorned canopy supported by four pillars is one of the most important features for the nuptials. Beneath it, the bride and groom, along with their immediate families, sit before a sacred fire and perform religious ceremonies to signify their new union. The mandap is decorated in shades of red, maroon, orange, purple, silver and gold, traditional colours believed to radiate happiness and prosperity. According to Hinduism, the pillars of the mandap symbolises the support of the couple’s parents, as well as the four Vedas, or texts.

Barat is one of the most fun filled traditions in the entire wedding ceremony. It is basically the procession, which proceeds from the house of the groom, towards the wedding venue. The procession is attended by the all the relatives and friends from the groom’s side.

The day before the wedding, the bride and her female friends and family members paint their hands, wrists, palms and feet in elaborate patterns with henna, a vegetable dye, to bestow luck upon the bride. Mehndi is the overall ceremony of applying the dye.

Often, the design on her palm includes a hidden inscription of the groom’s name. The belief is if the groom fails to find his moniker within the intricate detail, the bride will be the more dominant one in their marriage. It’s also said the deeper the colour of the tattoo, the stronger the love between the bride and groom will grow.

The Sangeet ceremony, as the name suggests, is all about dance and music. It is one of the most enjoyable ceremonies before the wedding and is exclusively for women.

Var Mala ceremony is an important main wedding day ceremony. It is also known as Jaimala and basically involves exchange of garlands between the bride and the groom. .

Indian weddings have a charm of their own. As per the tradition the wedding is primarily organized by the bride’s family, however, the reception might be an exception.

Vara Satkaarah: This refers to the reception accorded to the bridegroom and his kinsmen at the entrance of the wedding venue where the groom receives blessings from the bride’s mother who applies a tilak of vermilion and turmeric powder on his forehead.

Madhuparka Ceremony: The groom is accorded another welcome, this time by the father of the bride at the wedding mandap.

Kanya Dan: One of the most pure sacrifices ever, the bride’s father gives away his daughter to the groom to the accompaniment of chanting of sacred mantras.

Vivah-Homa: The sacred fire ceremony is kindled by the priest presiding over the marriage ritual to ensure the commencement of all auspicious activities.

Pani-Grahan: The bride’s right hand is placed in the groom’s left hand whereby he accepts her as his lawfully wedded wife.

Pratigna-Karan: With the bride leading, the couple walks around the sacred fire while taking vows of loyalty, steadfast love and life-long fidelity to each other.

Shila Arohan: The mother of the bride assists her to step onto a stone slab and counsels her to prepare herself for a new life.

Laja-Homah: The couple offer puffed rice into the sacred fire as a symbol of offering to the Fire God, whereby the bride stands in front of the groom and keeps her palms over those of the groom.

Parikrama/ Pradakshina/ Mangal Fera: The most important aspect of a Hindu wedding ceremony, taking these seven rounds around the sacred fire legalizes the marriage according to the Hindu Marriage Act as well as traditional customs.

Saptapadi: Saptapadi indicates the seven steps taken by the couple that represents nourishment, strength, prosperity, happiness, progeny, long life and harmony and understanding, respectively. This is done after the groom’s scarf has been tied to the bride’s dress.

Abhishek: Abhishek entails sprinkling of water, meditating on the sun and the pole star by the couple.

Anna Praashan: The couple gives oblations in the fire and then feed a morsel to each other as an expression of their mutual love and affection.

Aashirvadah: The couple receives blessings from all the elders in the family who wish them a successful married life

Rite of Brahmana (Brahma): This rite involves the father of the bride inviting the prospective groom who is now considered to be a man to learn in the Vedas and in his house good conduct and thereafter handing his daughter to him after decking her with jewels and costly garments.

Then a special wedding gift is given to the bride, a necklace signifying her married status. 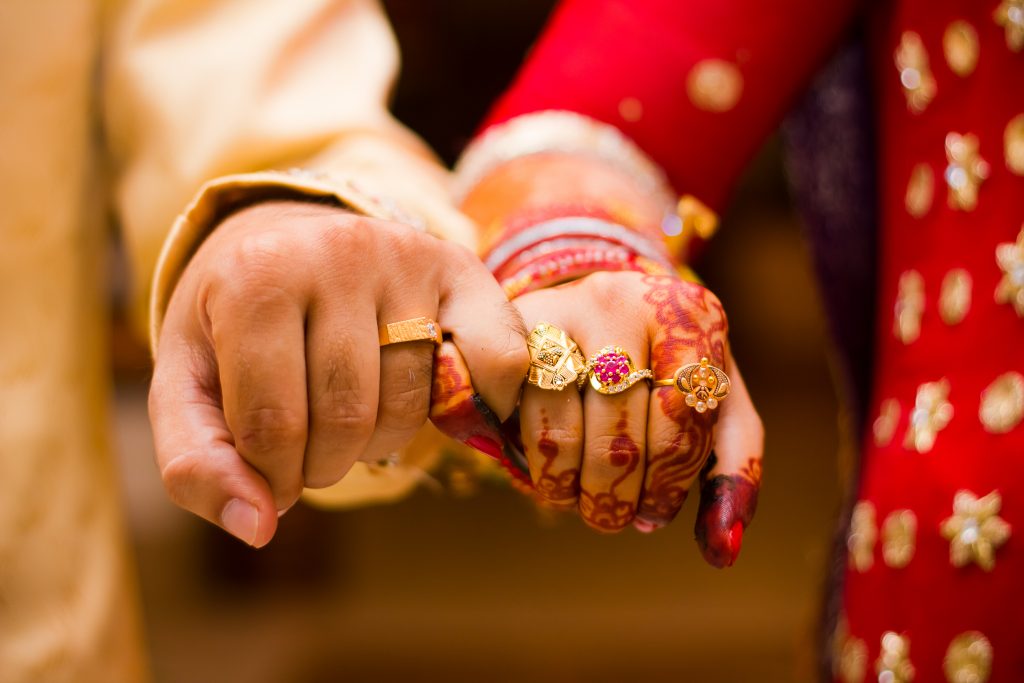 Sponsoring Your Spouse from India to Canada

Possible Challenges for Sponsorship from India

An applicant cannot ultimately succeed by simply memorizing a list of possible questions and answers – this is a hallmark of a fraudulent application. Instead, the applicant should be comfortable communicating about their relationship with the officer, and should make sure that the bona fides of the marriage are clear.

Just as every husband and wife know each other, the applicant should know the personal details and history of his or her sponsor, and vice versa. Communication and other indications of a genuine relationship must be highlighted and brought to the visa officer’s attention.

Supplementary Information – Your travels [IMM 5562] (PDF, 1.76 MB)
The principal applicant and all family members included in the application who are 18 years of age or older must complete this form.

Are documents issued in India issued in any language other than English or French? If so, what language(s)?

The official language for business and documentation in India is English. However, some older documents are issued in Hindi or other languages. Any document not issued in French or English must have a translation which meets IRCC requirements.

Is a visa required for a person from India to enter Canada if they wanted to do In-Canada sponsorship?

A person from India who wishes to enter Canada in order to visit a fiance or spouse while applying for a spousal sponsorship must obtain a Temporary Resident Visa before being allowed into Canada.