How To Marry And Sponsor Your Spouse From Armenia

Requirements To Get Married in Armenia

On submission of these documents, the State Registrar issues a Marriage License to the couple, which is valid for 10 days from the time it has been issued. If the couple intend to change the date of marriage, they can do so within this time, and request a date no later than 3 months from the license issue date.

Once the marriage takes place, the State Registrar will formally issue a Marriage Certificate to the couple, legally recognizing their marriage.

The property acquired by spouses in the course of marriage is their joint ownership, unless otherwise prescribed by law or by a contract concluded between them.

Costs To Get Married in Armenia

A state duty in the amount of AMD 1,000 is charged for registration of a marriage with participation of a foreigner.

Steps To Get Married In Armenia

Armenia has a secular government, thus the act of the marriage requires State Registration. There are no requirements to register the marriage in the Church or in other religious institutions. Joint application of both parties is required for state registration of the marriage.

State Marriages in Armenia are administered by the Body of The Civil Status Acts Registration (State Registrar).

Where one spouse is a foreign national/citizen then the Ministry of Justice of the Republic of Armenia accepts applications and gives permission to the couple to register their marriage.

Proxy marriages are not recognized, however, in case one of the parties cannot appear to the Civil Registry, separate declarations must be provided and approved with signatures as required by law.

The following guidelines are applicable to all marriages in Armenia.

The traditional Armenian wedding has many traditional activities and events. Some of them have cultural significance, some important to the couple and their family, and some just for fun.

Although this tradition has lost its popularity in recent years, it is still important. The groom talks to the bride to ask for her hand in companionship. When she obliges, the groom then goes to the bride’s family to seek their approval. It is rare for the family to decline once the woman has made up her mind.

This ceremony is referred to as Khosk-Arnel which loosely translates to asking for permission. It is only limited to the two families. The small ceremony involves an invitation from the bride’s parents to the groom’s parents. They come with flowers and chocolates. The two sides will engage in a talk to introduce their lineage and genealogy to make sure that the bride and groom are not related.

At this stage the marriage registration takes place, following which a marriage license is issued to allow the couple to get married and legally recognize their union. Traditional festivities continue after seeking the license.

This is an old Armenian wedding ceremony that has been passed down generations across decades. It is very common in Armenia, Iran, and Isfahan. It involves the placing of red and green ribbons on the heads of the bride and groom. Red signifies sacrifice while green symbolizes fertility, peace, and abundance of life.

When the bride has finished dressing her wedding gown, a close male member of her family is invited to help her wear shoes. This is usually a brother, uncle or close family friend. Similarly to the door closing ceremony, the man can hold onto one shoe to demand some form of payment from the groom or his family.

It is traditional for all single female relatives of the bride to write their names under the soles of her shoes. This is a sign of wishing her good luck. When each female gets married in the future, the bride crosses the names out.

Just when the bride is ready to leave for the wedding venue, the door is closed to prevent her from leaving. This is usually done by an elder brother or such a close male member of the bride’s family. He acts as a “bouncer’ and is sometimes accompanied by other male relatives. They block the door to demand some kind of payment for the ‘hard work that they have done’ to raise the girl over the years. Oftentimes, the bouncer holds a sword and mockingly threatens to prevent the wedding from happening.

It is dependent on the family of the groom to decide who pays up. Payments are usually in the form of money, but traditional gifts such as foodstuffs and clothes are given. It is customary for the initial offer to be a small amount of money. The bouncer examines it to determine whether or not it is enough to warrant him opening the door.

If he is not amused, he demands more payment. All the while, he demonstrates visibly as other members of the bridal party take pictures and videos. In extreme cases, large sums of money are offered to appease the ‘angry and hungry’ family. In most traditional ceremonies, the father of the bride will step in to cut the deal.

Just like all weddings, there is the best man at an Armenian wedding. The local name is kavor or kokahayr which means godfather in English. He should be older than the groom, such as an elder uncle or even brother. He escorts the groom throughout the ceremonies. The bride can choose a maid of honor from her friends or close family members.

The wedding party splits into two groups – the bride’s side and the groom’s side. A bride’s party is composed of her immediate family, maids, a maid of honor, and close family members. On the other hand, the groom’s side is composed of his best man, groom’s men and parents. Each family gathers at their own homes to dress and get ready for the function.

At around 10.00 am, the groom’s family heads to the bride’s parent’s house. They request for the gate to be opened, upon which they join the bride’s family in song and dance. Traditional foods and drinks are served as they dance around. Shortly afterward, they proceed to the church as guests cheer.

A presiding minister blesses the rings and asks the bride and groom to make their vows. In traditional Armenian history, the bride takes the name of the groom. This is a fairly short affair that is followed by a photo session. When it is over, the party proceeds to a reception at the home of the groom.

It is a strict tradition for the groom’s family to entertain the guests, no matter how large the wedding party is. This is a sign that the man is wealthy enough to cater to the woman. It starts just after noon where a light traditional cocktail is served. The bride and groom must drink from the same glass to symbolize their newly found union.

The main course is served by butlers who walk around in large platefuls. It is believed that food has to be plentiful so that every guest can leave their blessings at the house. It features a rich serving of meat, chicken, and fish. These are accompanied by traditional Armenian potatoes, beans and an array of vegetables.

Most Armenian weddings are lavish, with the groom flashing gifts such as jewelry to the bride. Guests also shower the couple with gifts and cash. All the while, loud Armenia music plays as guests dance and drink to their fill. The wedding reception can continue up until the wee hours of the following morning.

The state registration of a marriage is carried out by: 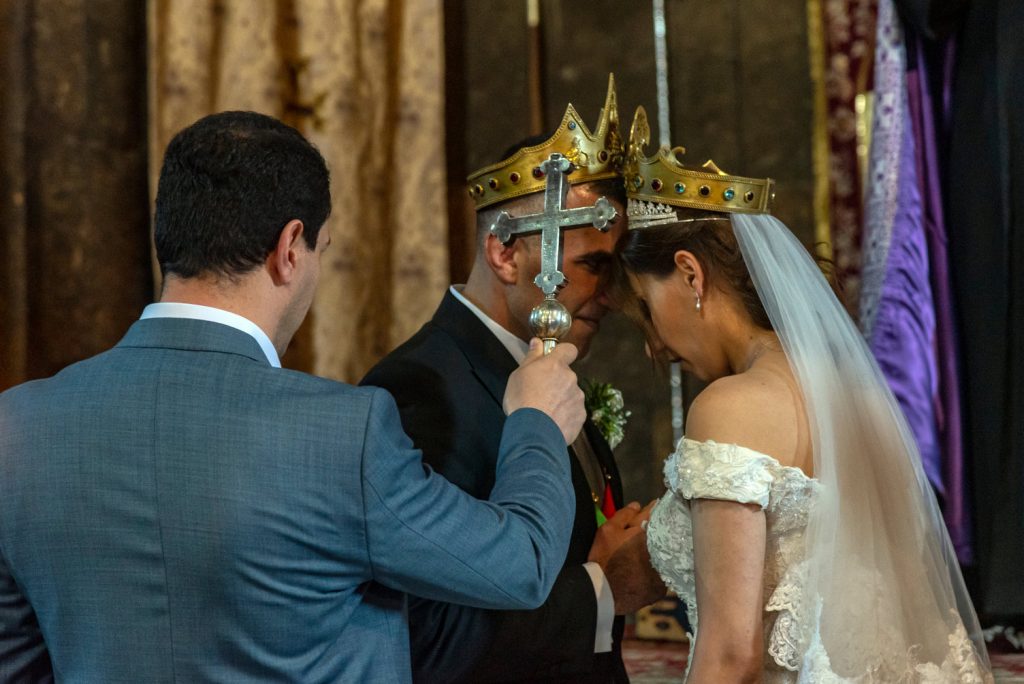 Sponsoring Your Spouse from Armenia to Canada

Possible Challenges for Sponsorship from Armenia

If those wishing to marry are not able to appear to the body of the civil status acts registration for valid reasons on the day they have decided, then the period of registration of the marriage is changed upon their request. A note about that is made on the application for marriage.

Where the applicants fail to appear to the body of the civil status acts registration within a period of three months following the day of filing the application for marriage, the application is deemed as invalid.

Based on the joint application of the persons entering into marriage, the 10-day period of the state registration of a marriage may be shortened in case of the following valid reasons:

The valid reasons must be attested by relevant documents (for example, a medical reference regarding the pregnancy of a woman, a birth certificate of a child and certificate of establishment of paternity, a reference from the place of military service, a document attesting the departure from the territory of the Republic of Armenia, etc.)

Due to a high incidence of marriage fraud in applications for sponsorship from Armenia, interviews are frequently convoked for the applicant to prove that their relationship with their sponsor is genuine.

Questions frequently asked at the interview include:

The intention of the visa officer would be to determine eligibility for spousal sponsorship of the sponsor and the sponsored person, and that the marriage is genuine (legally recognized) with all the evidence that would support the genuineness of the marriage.

The applicant should not try to memorize things to tell the visa officer, but should instead be comfortable talking about the details of the relationship which may include very personal details.

The principal applicant and all family members included in the application who are 18 years of age or older must complete this form.

This form needs to be completed for anyone included on the application who has ever held a high ranking/senior official government position or served in the military, army, defence or police unit, (including National Service), and submit a copy of the military card/booklet, including blank pages, if applicable.

For divorces obtained in Armenia, submit an original “Decree Absolute”.

The principal applicant and all family members included in the application who are 18 or older must provide a copy of all pages of their labour book/workbook if they hold a passport for this country.

Are documents issued in Armenia issued in any language other than English or French? If so, what language(s)?

The official language for business and documentation in Armenia is Armenian.  Any document not issued in French or English must have a translation which meets IRCC requirements.

Is a visa required for a person from Armenia to enter Canada if they wanted to do In-Canada sponsorship?

A person from Armenia who wishes to enter Canada in order to visit a fiance or spouse while applying for a spousal sponsorship must obtain a Temporary Resident Visa before being allowed into Canada.